My Week at the Crow Barn

I have just returned from an exhilarating, humbling, exhausting week at Nancy Crow’s Timber Frame Barn in Ohio. 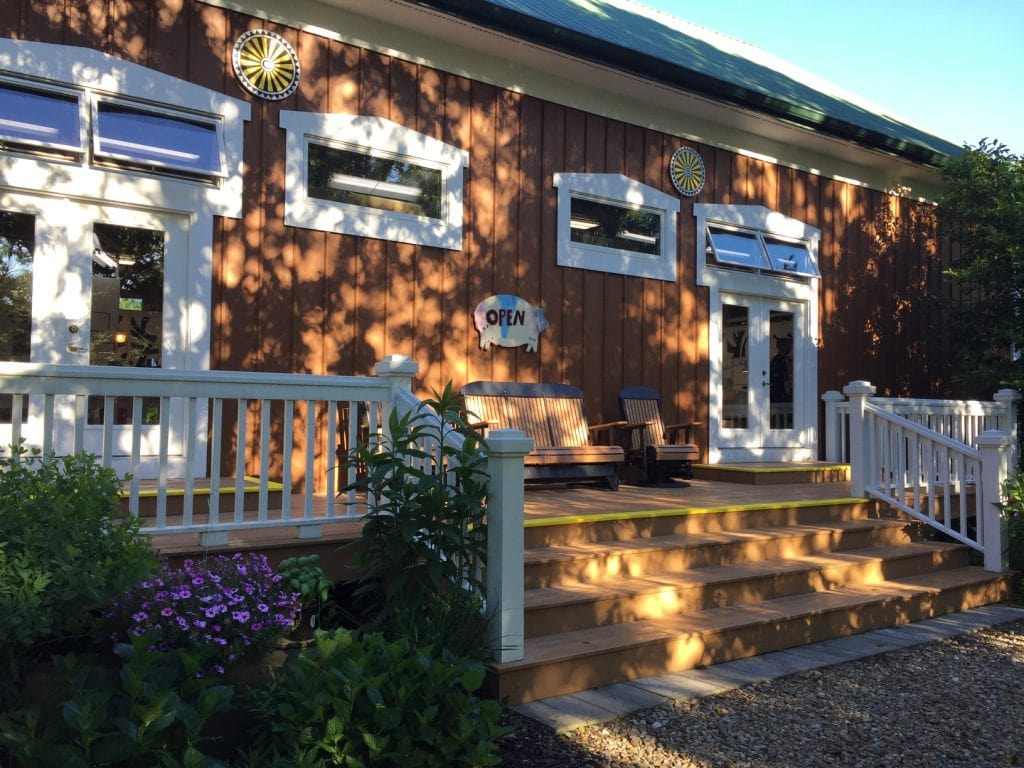 It was my first trip to the Barn for a week-long workshop with Nancy, and I had no idea what to expect. Of course I had talked to several friends who have studied with her for years, but nothing prepared me for the actual experience. Many people told me tears would be involved in the learning process.

Nancy Crow is perhaps the premier living artist who creates in fabric. She doesn’t care for the term “art quilter.”

I want to be an artist. Not a quilt artist, not a fiber artist–an artist. Period. I’m almost entirely self taught, although I have a BA in Art History, I’ve taken a few classes on techniques, and have lots of books for reference. I have wanted for some time to push myself to another level, but I wasn’t sure where to begin. Nancy Crow has a reputation for honesty–sometimes brutal honesty. I knew she would help me find a new direction, if I was up to hearing it.

The week did not start well. I had signed up for Improvisational Exercises, Part I, thinking that I already know a lot about Improv, so I couldn’t be too far behind. I only had this one week available in my schedule, but I realized when I arrived last Sunday that almost everyone else in the class had signed up for Part II as well, and I had made a mistake in coming for only the first week.

In addition, although I had spent hundreds of dollars on fabric for the class, I did not have anywhere near enough, and I didn’t have the variety that was necessary, particularly in the light values.

I took a deep breath, tried to enjoy the welcome dinner, and decided I would just have to figure it out.

Class officially started on Monday, with Nancy laying out the overall details and the parameters for the first exercise–mercifully in black and white. I felt excited and nervous at the same time. She has high expectations for her students, just as she does for herself.

My first attempt, above, was deemed to be not acceptable, lazy, even. So I had to start over. And over, and over. Monday was a difficult day.

Tuesday didn’t start out much better. I was by that time on to the next section of the first exercise, and when Nancy came by to look at my work, she asked me if I understood the exercise prompt.

Oh boy. I took a deep breath and reminded myself that I had come here voluntarily to learn. I replied, “I think I’m getting glimmers.” She agreed that glimmers where all there were and told me to keep working–starting over again on the exercise.

In the image above, the first section of the exercise has morphed into something that looks like a flying goose, or a bird of paradise flower. The second section had to be scrapped.

I took tons of photos of each stage, so I could go back to them if I decided I wanted to. One of the most interesting, informative parts of being at the Barn is trailing along after Nancy as she critiques the work of other students. I was able to learn a lot about what she was looking for not only from her comments on my work, but what she said to my fellow students.

The days are long–starting as early as 7 AM and going until 8:30 or 9 PM. Nancy isn’t there all that time, but the Barn is open for students to work, and you feel like you need to take advantage of every opportunity. It’s truly a retreat, including delicious, healthy lunches and dinners and camaraderie with the other students. But you don’t really linger over meals–that’s time away from stitching!

Tuesday was another discouraging day. But on Wednesday, the light bulb went on in my head. I was able to get an idea for the third section of the first exercise and go with it. I didn’t have to do that one over!

Wednesday afternoon I was given the parameters for the second and final exercise of the first week. I was a bit taken aback when I realized the size for this one was 6 feet square! I haven’t worked that big since I stopped making traditional bed quilts by hand–and that was a very long time ago. 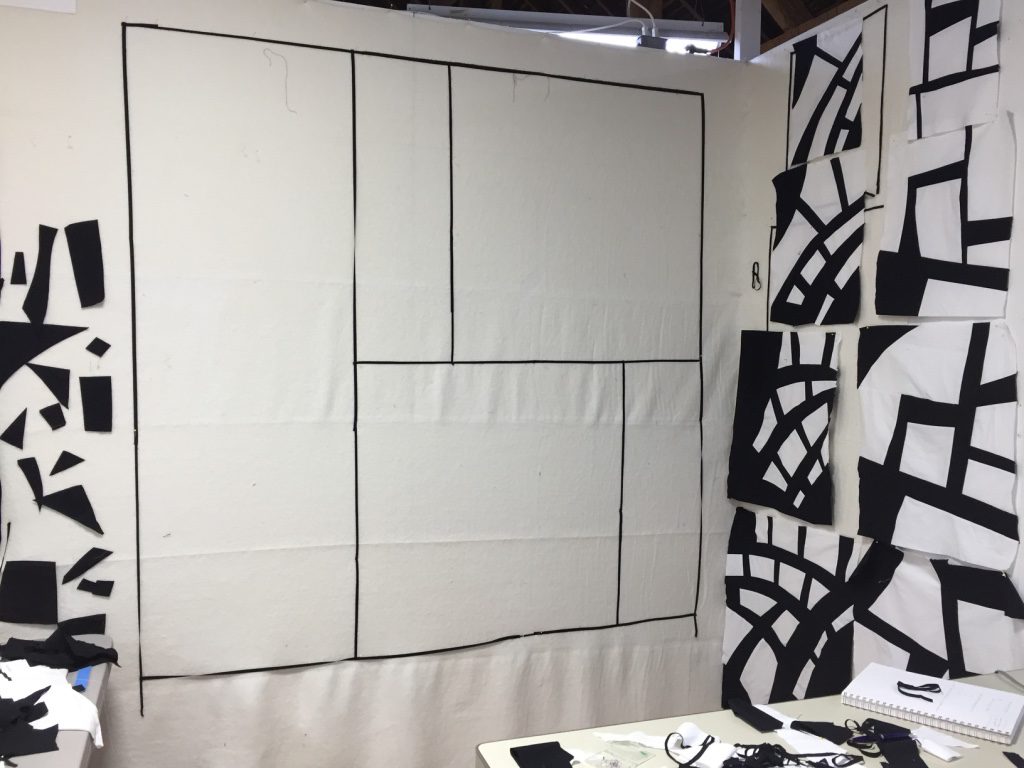 After dinner Wednesday night I laid out the lines to demarcate the size I was going to be working with.

Time was getting short now–I only had two more days to get this.

Astonishingly, I came in on Thursday and just starting cutting–drawing with my rotary cutter. 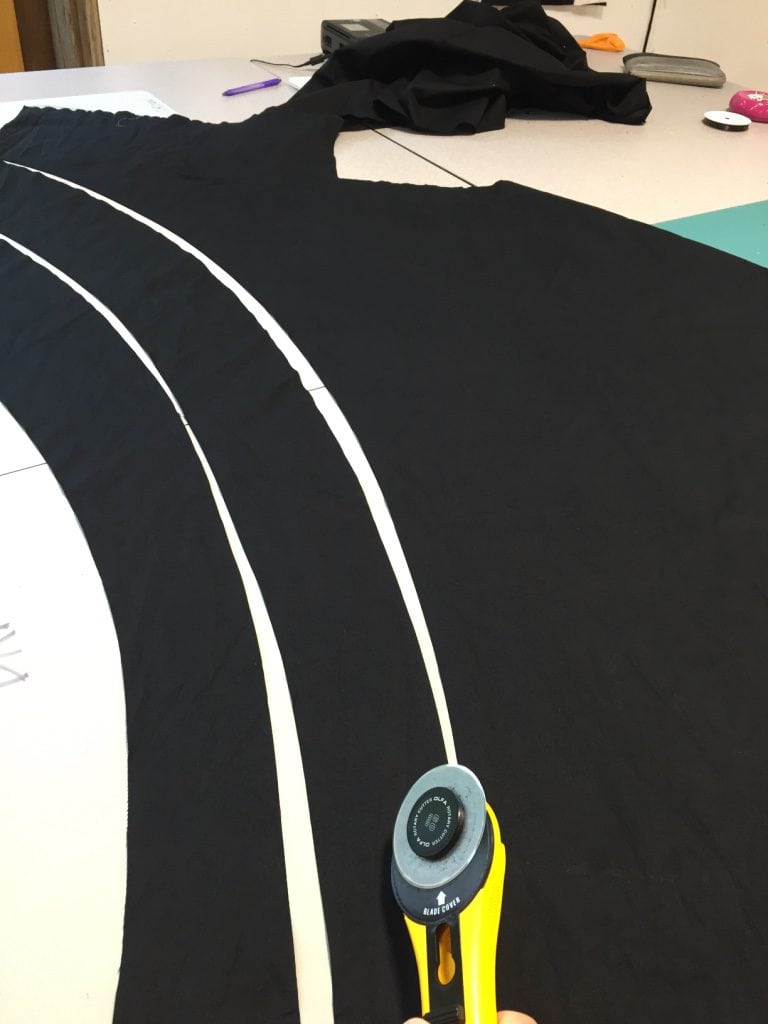 There’s something very freeing about using a rotary cutter to draw expressive, free form lines and shapes. I had done it before, but never on such a large scale.

My composition came together on Thursday–cutting, evaluating, cutting some more. 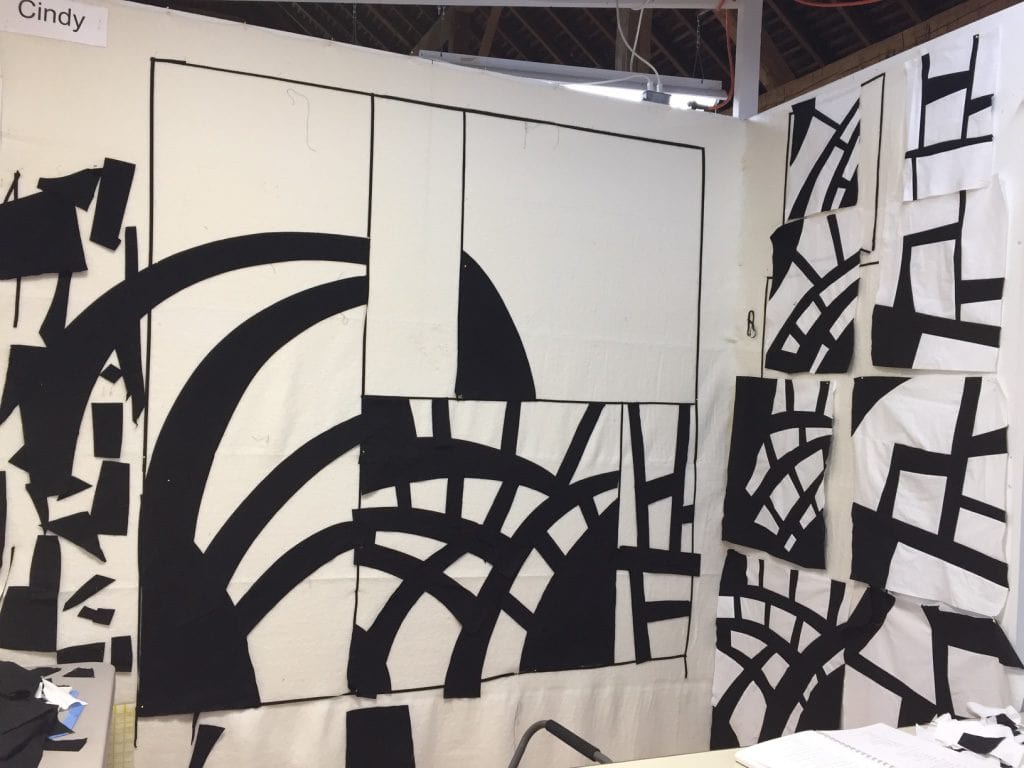 I was using ideas from the smaller studies I had done before to create something entirely new, and I hardly wanted to eat or sleep. 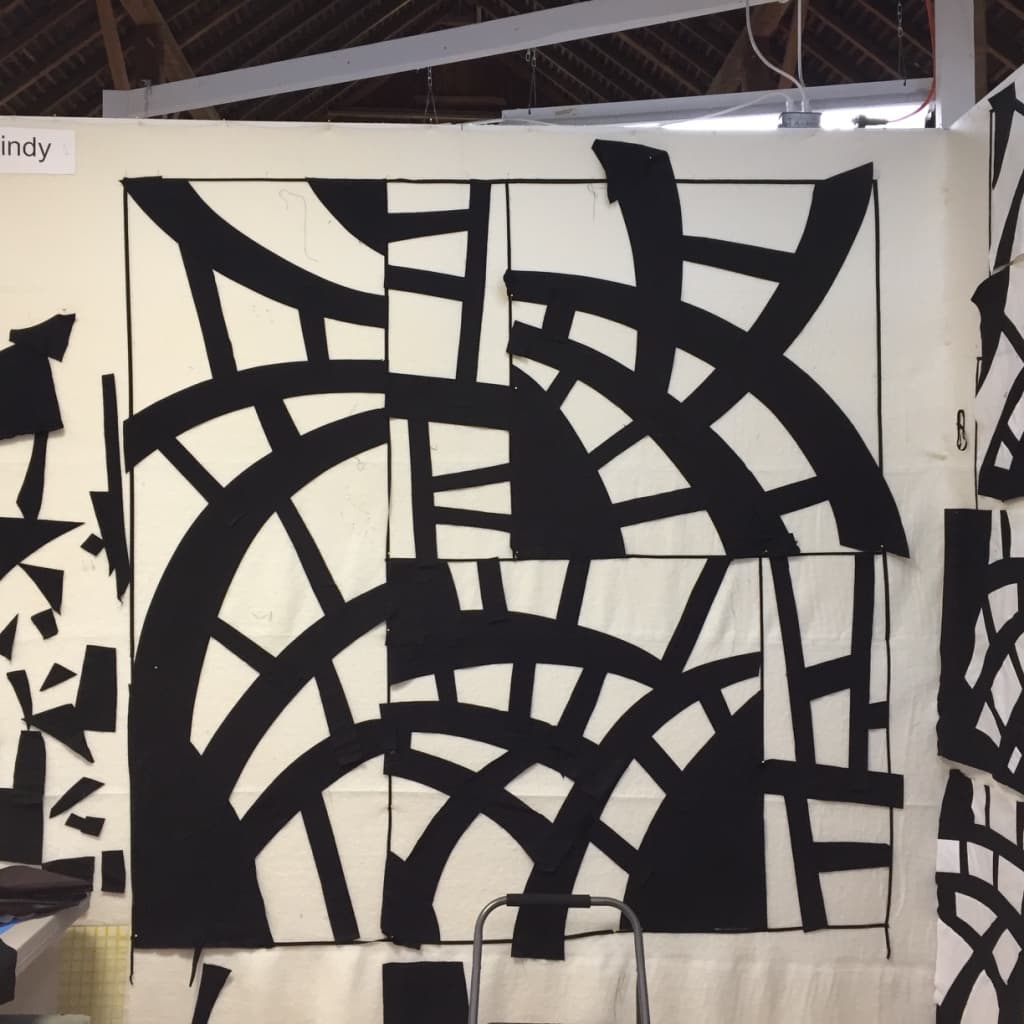 Above is the final black and white study–6 feet square!

Thursday afternoon I got the OK to go ahead and start adding color to the composition. I thought this would be the easy part, and boy was I wrong! This is where my lack of enough variety in my yards and yards of fabric began to trip me up.

I got the colors all laid in by Thursday night, but I had made the mistake of telling Nancy that I don’t normally use white, or really any light values, in my work. She of course said that was unacceptable. 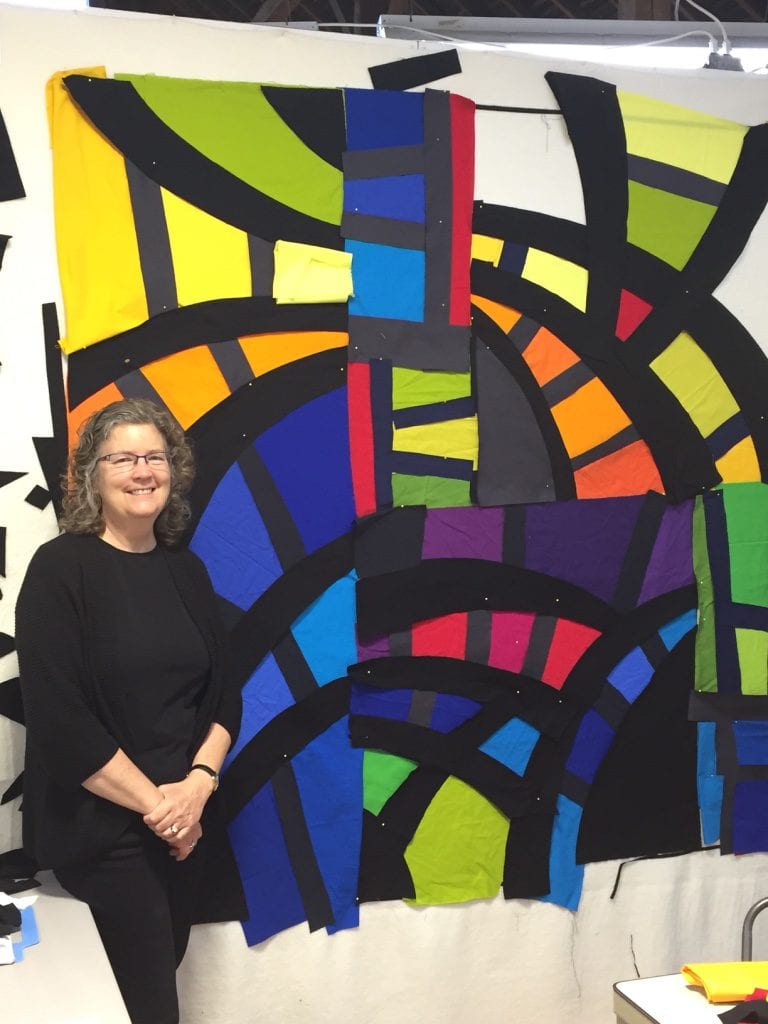 I had left two areas of white in the upper right corner, but when I came in at 7 AM on Friday morning–my last day–I knew that wasn’t going to be enough. It looked like I had just forgotten to put any color there.

So I asked a couple of fellow students to give me some feedback–I’m enormously grateful for their support and encouragement.

I had tried taking out just a few of the color patches here and there, but it just looked like I was introducing wholes in the composition without any plan. I was particularly proud of the large swath of blue on the left that I’m standing in front of in the image above. So of course when I decided that drastic measures were necessary, that section had to go!

As a color person, it was incredibly difficult taking the color OUT and leaving white spaces, but when I dragged myself to do it, I was just astonished at the beautiful lines that were created in the composition. 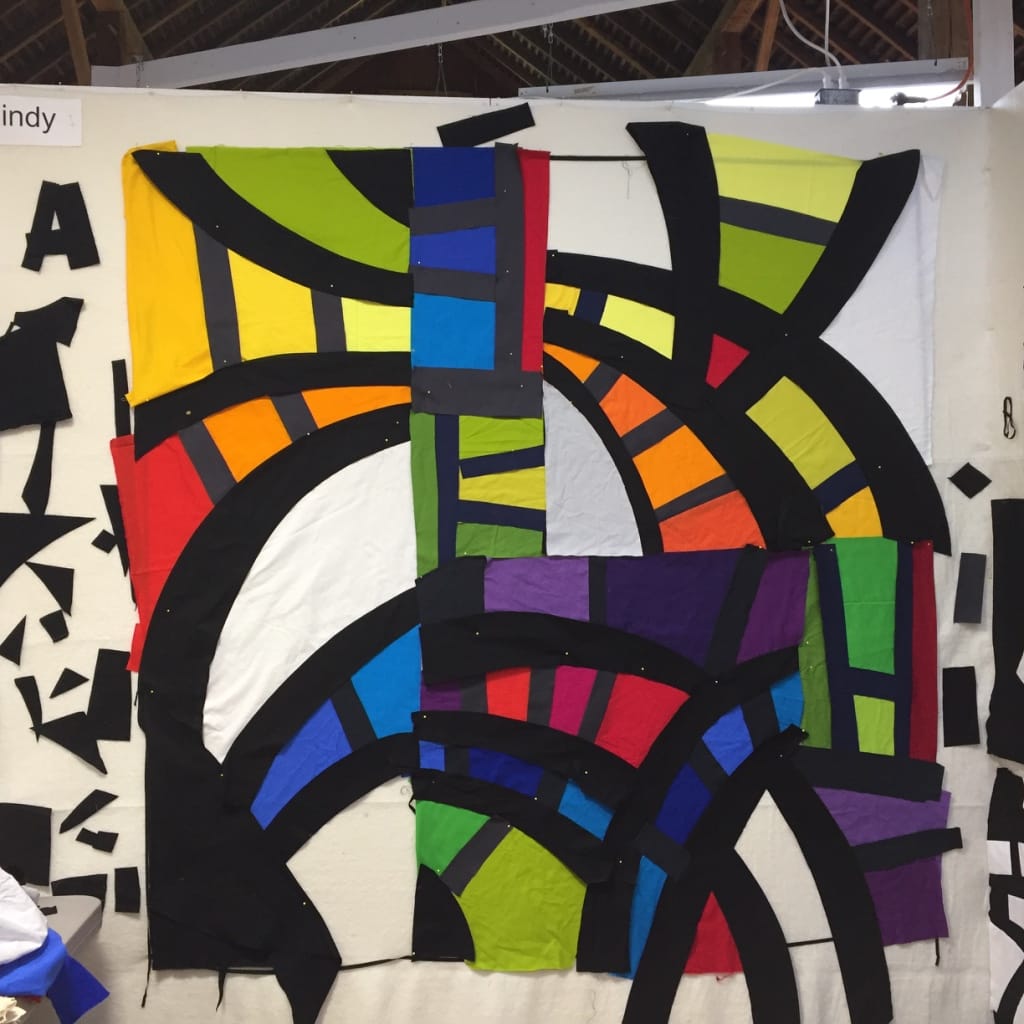 That’s the whole point–I finally got it. And I got an encouraging hug from Nancy.

I wasn’t able to get the piece stitched together, and there are definitely sections that still need work, but I’m happy with what I have so far.

I came to the Barn with the attitude that I had to let go of any preconceived notions, adopt a learning stance, and work as hard as I could. So that’s what I did.

And there were no tears. At least not from me–Nancy may have despaired at the beginning that I would ever get it!

I have no idea how I will integrate these new ideas into my work, or my studio practice, but I’m excited and energized to figure it out!

Oh–and I signed up to go back next spring for more–this time for two weeks.

If you’ve gotten this far, thanks for reading this long post, and I’d love to hear your comments.