Travels in Alaska – There were Bears!

I’m just back from an amazing week with my family in Alaska visiting two remote National Parks. 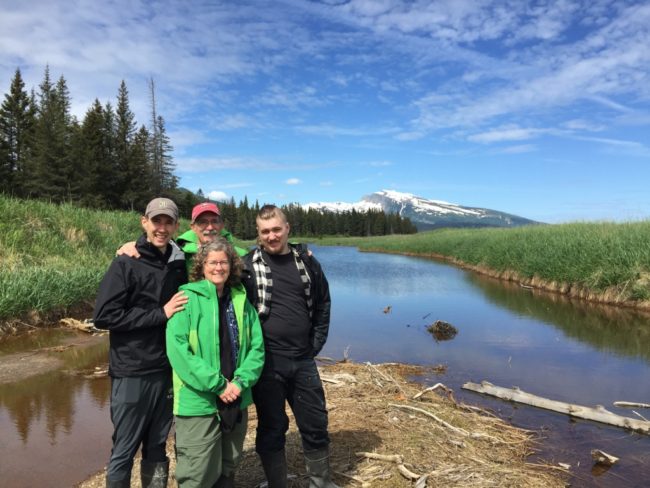 Twenty two years ago, my husband and I began a quest to visit all of the US National Parks with our sons. They were 5 and 3 at the time. The boys are 27 and 24 now, and we are getting close to achieving our goal, despite the fact that there have been about ten new parks added since we started in 1995. We have all been to 52 of the 59 parks, which I think is pretty cool!

The ones that we have left are challenging to get to, primarily in Alaska, plus one in American Samoa–which is halfway between Hawaii and New Zealand in the Pacific Ocean. 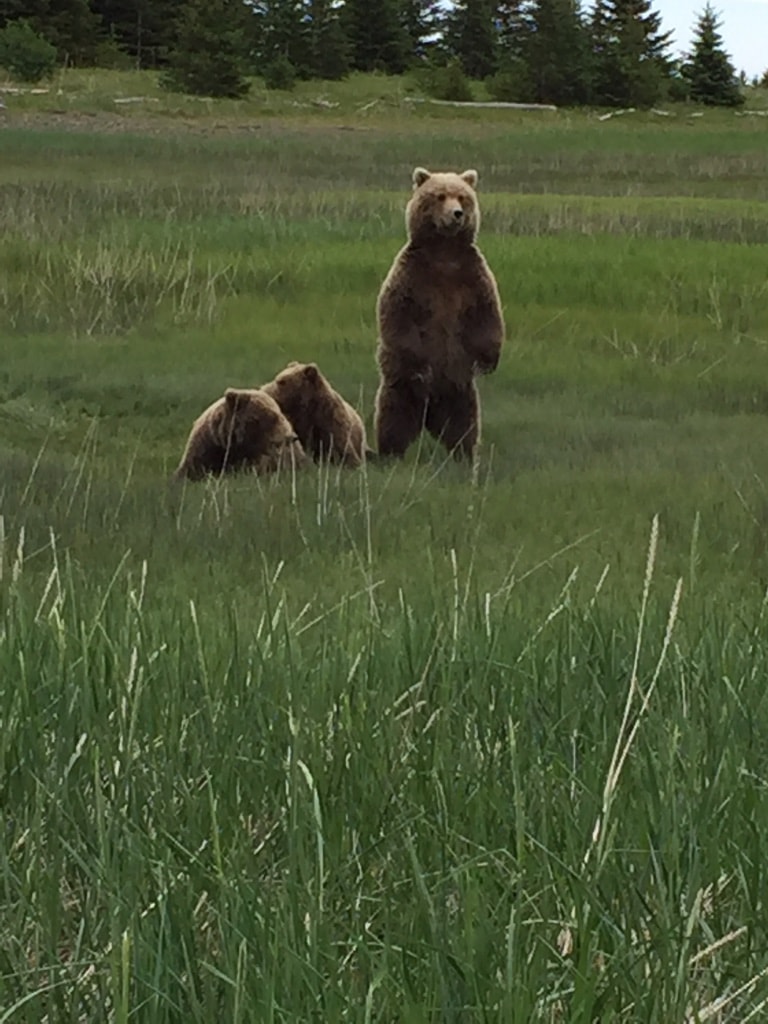 On this trip we visited Lake Clark National Park and Katmai National Park in southwestern Alaska. There are no roads to these places, so you have to get there via pilots with small planes. And there are bears–lots of bears!

We flew into Anchorage and then took a small plane with five passengers and the pilot to Silver Salmon Creek Lodge in Lake Clark National Park for three days. The lodge is located on Cook Inlet in southwestern Alaska, and is home to a number of brown bears. We landed on the beach at low tide and an all terrain vehicle took our luggage through the meadow to the lodge. 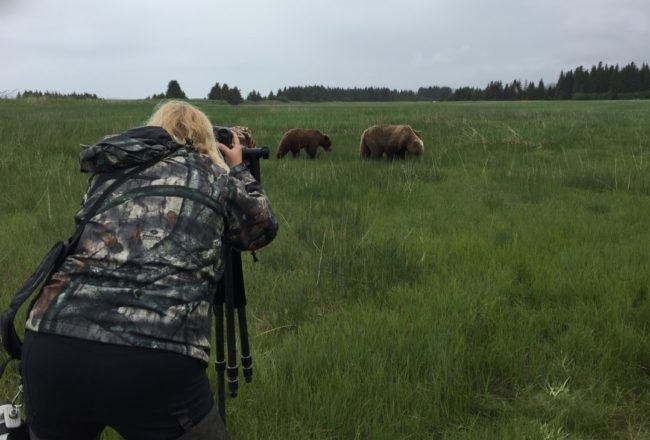 Photos with the Pros – Cindy Grisdela

This particular place attracts serious photographers to take pictures of the bears, and they have trained guides who take small groups out into the meadow to get the shot. We had only our iPhones, but it was fun to see the pros at work. The guides know the bears and their routines, and the bears seemed to be used to having photographers around. Don’t try this at home! For really good bear photos, check out RM Steck Photography online. That’s Ruth in the photo above. She was incredibly patient with us tourists! 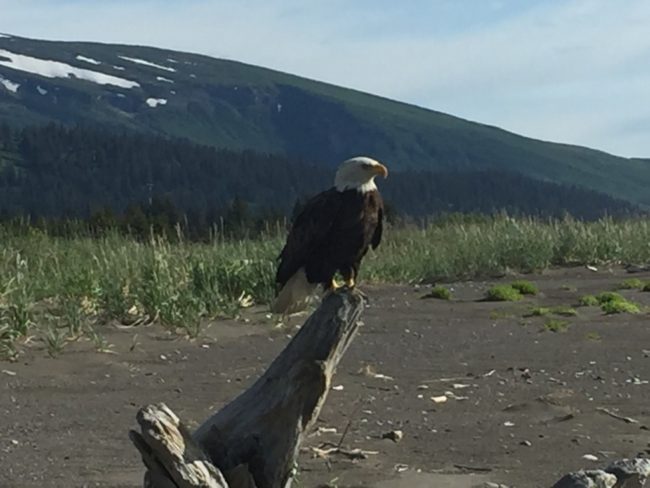 We followed a lot of bears, but we were also able to do a little canoeing, hiking and exploring around the area. I was able to get pretty close to this bald eagle before he flew away. 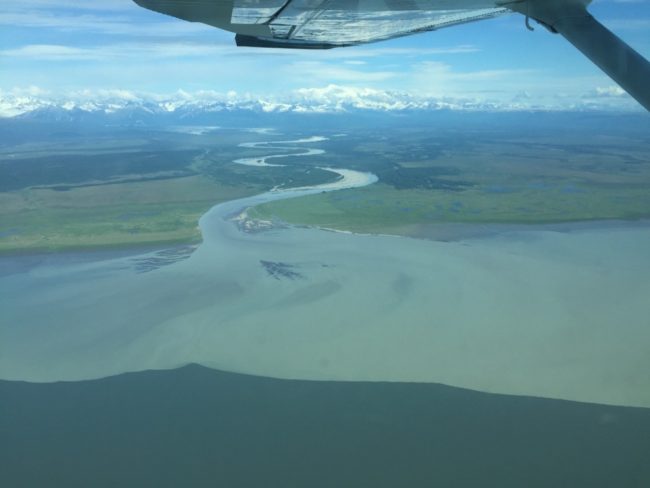 Beauty from the air in Alaska 2017 – Cindy Grisdela

Above is a photo of the beautiful landscape from the air between Lake Clark and Anchorage. 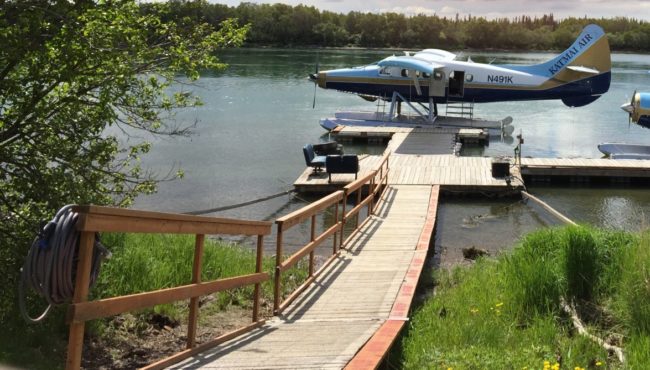 Next up was Katmai National Park, also in southwestern Alaska, for two days. It was just south of Lake Clark, but we had to fly back to Anchorage and then out again because you have to land at Brooks Lodge in Katmai with a float plane. Katmai is well known for bear watching, but it’s early in the season yet and the salmon haven’t starting running, so we didn’t see as many as we saw in Lake Clark. This area of Alaska is part of the Pacific Ocean Ring of Fire –which is famous for volcano activity. There was a major eruption near the park in 1912, and we took a side trip to the Valley of 10,000 Smokes to get a sense of it. 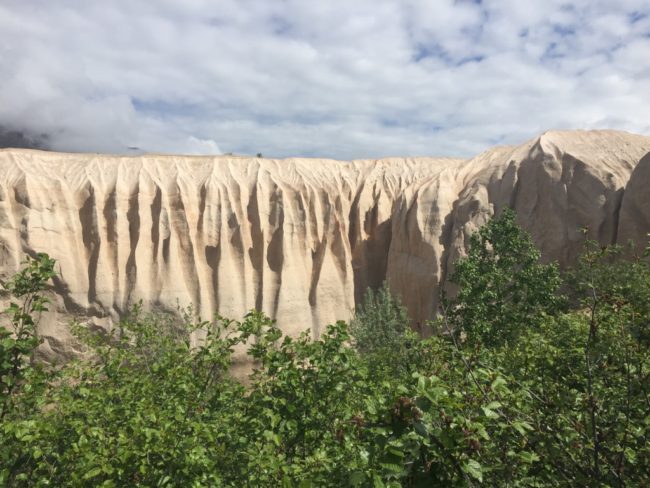 We took a three mile hike down into the valley to see the volcanic landscape left by the eruption. I was fascinated by these cliffs of ash–wouldn’t the lines make an interesting quilt? 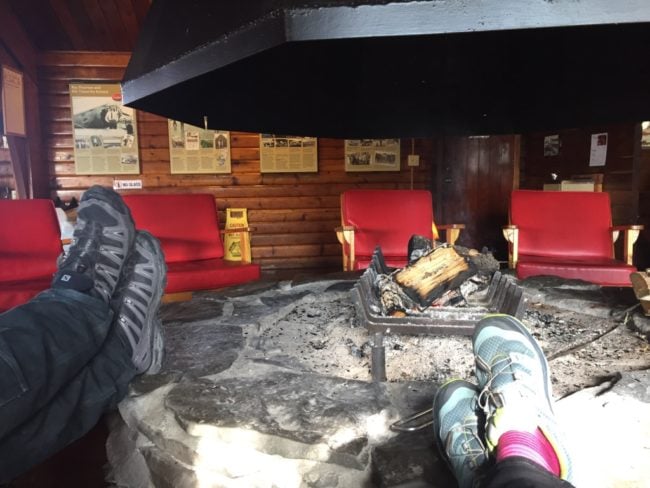 It was chilly up there, so we took advantage of the fireplace to read and relax. Even an active vacation needs a little down time! 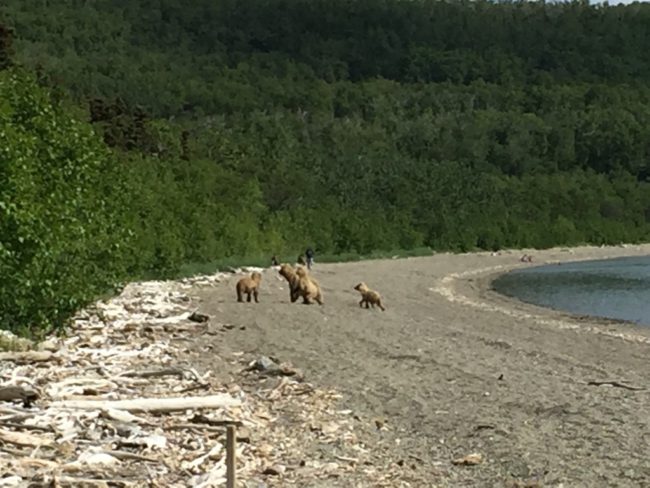 As we were leaving Katmai, a mother bear and her cubs ventured out onto the beach. Brooks Lodge is staffed by Park Rangers, and they had different rules for how close you could get to the bears, so this shot is taken from farther away.

All of the wildlife photos were taken with my iPhone and cropped to bring the animals closer, so we weren’t actually as close to the bears as the photos appear. But we were still pretty close! 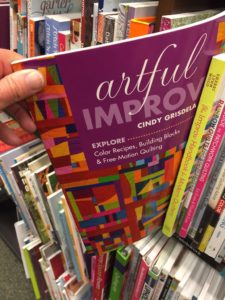 Artful Improv in the wild in Alaska – Cindy Grisdela

We had a long layover in Anchorage on the way home, so the boys and I went out to a bookstore and a movie–and guess what I found in the Barnes & Noble in Anchorage! It’s always fun to see my book out and about.

It was a great family adventure–all the more precious because the boys are adults and on their own, but they still wanted to do the trip with us.

Thanks if you’ve read this far–I’ll be back to my regular quilting reports next time!