I’ve been working hard the last couple of weeks to get some new large scale pieces finished for my next show–the Rittenhouse Square Fine Craft Fair in Philadelphia. It’s October 12-14, but I’m teaching next week at the AQS show in Virginia Beach, so time is running out.

I started out with the black and white study below. This study is about 20″x 24″. 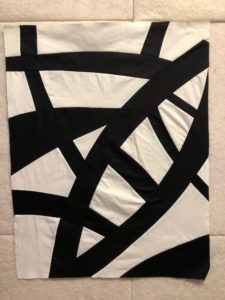 Then I began laying out the black arcs to define the composition. Unfortunately I forgot to take a picture at that stage, but below is one from a little farther on in the process when I was beginning to add some color. 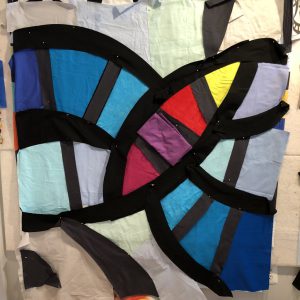 I think you can probably see that the final composition bears only a passing resemblance to the study I started with. The pod shape in the center is still there, plus the arcs and spines, but the whole thing went in a new direction. I’m so thrilled with this process! I could use that study for another quilt and it would be completely different.

I tried a couple of different ideas that didn’t include the arcs and spines, but I can’t seem to get excited about them, so I’ve decided to go with this wherever it leads until I run out of ideas or get tired of the imagery.

The name of this quilt is Aquarius–the pod shape reminded me of a fish and the blue arcs behind it could be the ocean. It’s going to end up about 50″ w x 60″ h. 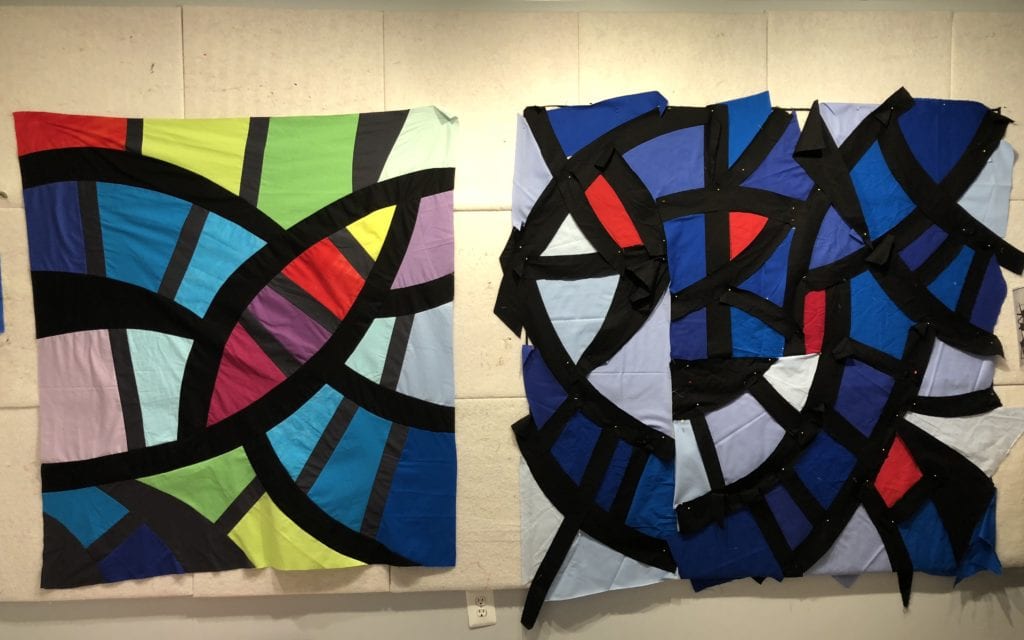 I started the quilt on the right earlier, but realized that it’s too big for my show booth at over 60″ square, so I had to work a little smaller. It’s a bit of a messy process laying out the design and putting in the colors, but I’m enjoying the challenge!

Today it’s on to adding the texture with free motion quilting.

Besides Rittenhouse, I have two other shows coming up this fall. Craft+Design in Richmond, VA November 17-18 and the Downtown Art Festival in Gainesville, FL December 1-2. If you’re in the area of one of these events, I hope you’ll stop by and say hello!

Plus I have work in several exhibits this fall and a busy teaching schedule–you can see where I’ll be when here.