March is a big month for me at the Torpedo Factory Art Center in Alexandria, VA!

I’m the featured artist in my studio–Fiberworks Studio 14–with two of my large scale art quilts on the back wall–another wall piece, Transit, was juried in to the March Open Exhibit at the Art League gallery, and I have a small piece for sale in the Target Gallery’s March 150 show and sale.

Fiberworks is my home studio at the Torpedo Factory, and I have work there all the time-below is my usual space. But it’s not large enough to show my new larger work, so I jumped at the chance to be the featured artist for the March exhibit “On the Edge.” I will be hosting a Meet the Artist reception on Sunday, March 31, 2019 to celebrate my exhibit from Noon – 4 PM at the Fiberworks Studio, 105 N. Union St. in Alexandria, VA. I hope you’ll join me! 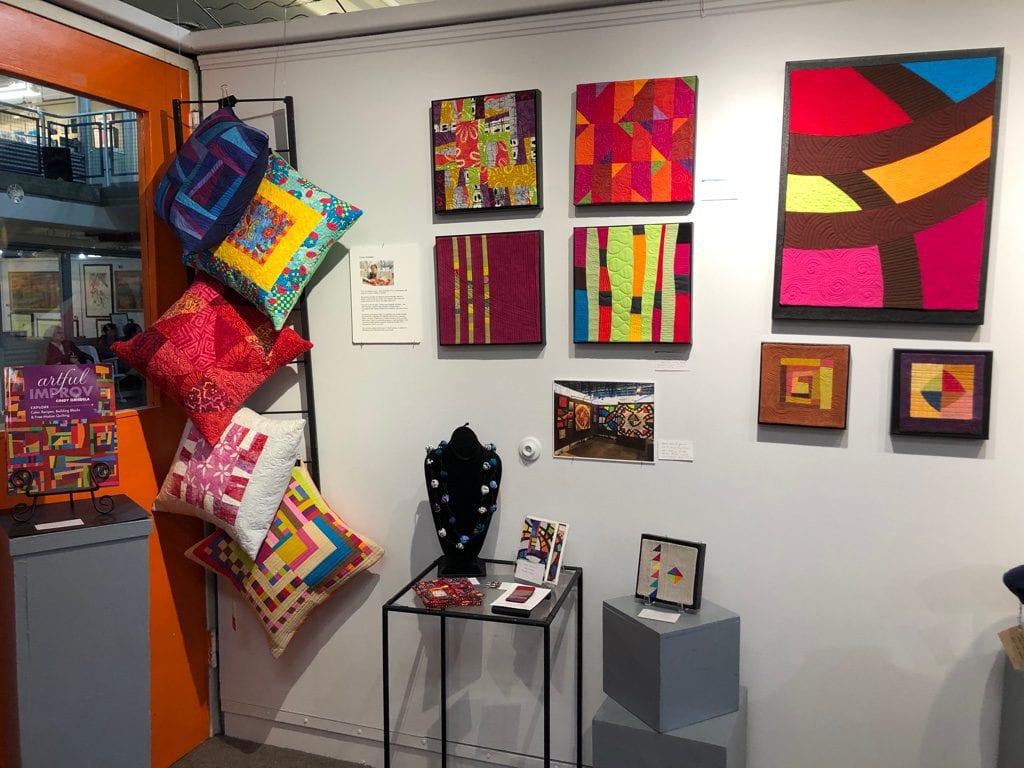 Aquarius, on the left in the large featured image, and Kaleidoscope, on the right, are part of a series I’ve been working on for the last year or so. The series is focused primarily on large curves cut free hand without a template or marking ahead of time. You can read more about Aquarius here and Kaleidoscope here and here. I really like how they stand out on that purple accent wall!

My primary aim in these pieces is to make a strong dynamic statement with color, line, and shape–like a painting, but with fabric and thread instead of paint. I started both with a rough sketch, then allowed the process to evolve as I cut and sewed. The finished pieces don’t bear much resemblance to the beginning sketch, and that’s just fine with me. I like the idea that I don’t know what the finished work is going to look like until–well, it’s finished. 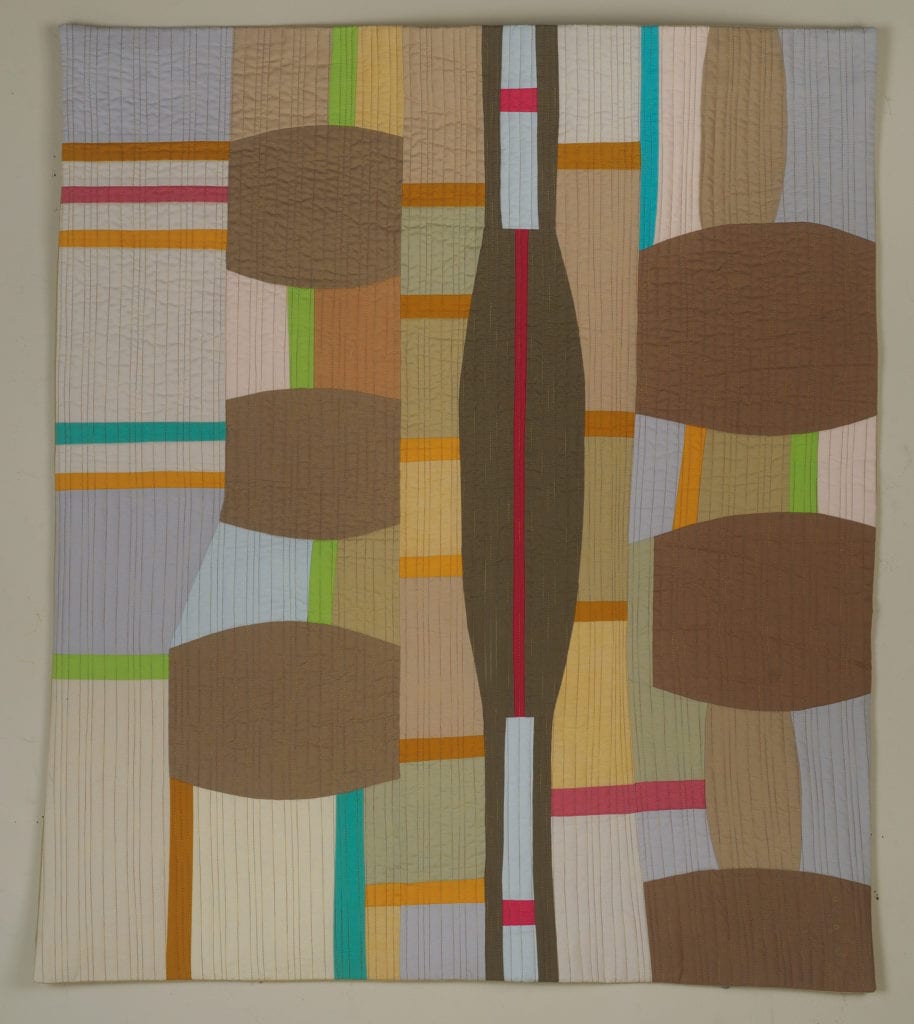 Another smaller wall piece, Transit, is hanging in the Art League gallery‘s March Open Exhibit. This one was designed in much the same way as the other two, but I challenged myself to use a more neutral color palette. Of course I couldn’t help myself and had to include those small pops of color! When my son saw it, he said it reminded him of a subway map. I had been thinking about rock formations as I was designing the piece, but once he said that, I couldn’t unhear it, so Transit it became. This show will be up until April 7, 2019, and there’s an opening reception in the evening of Thursday, March 14, which I will unfortunately be out of town for. 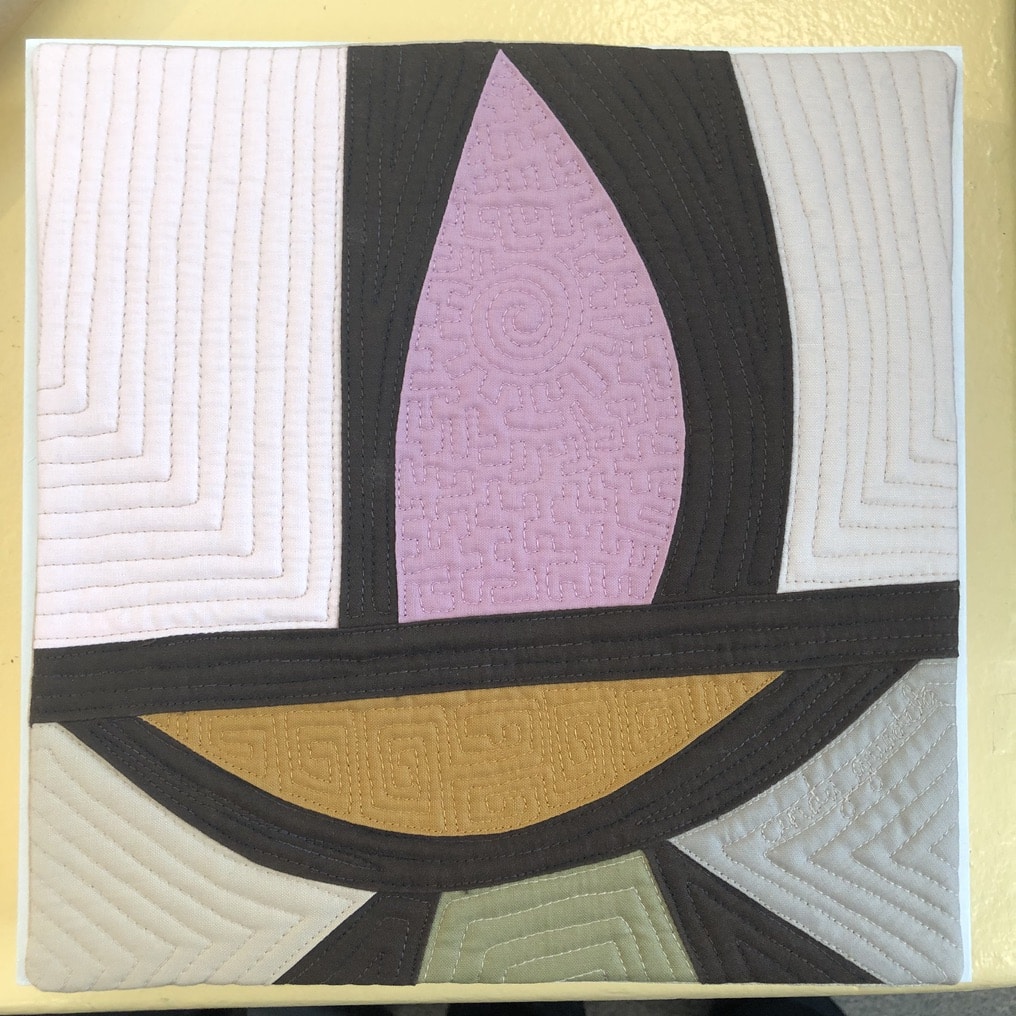 Finally, I donated a 10″ square to the Target Gallery’s March 150 show and sale. Each artist purchases a 10″ square, puts artwork on it, then gives it back to the gallery. The squares are hung in the gallery and offered for sale for $150 each until March 31, 2019. There’s an Art Party on Friday, March 29, where all the remaining pieces will be offered for $100. Below is a peek at the wall that has my work on it–there are more than 200 entries! 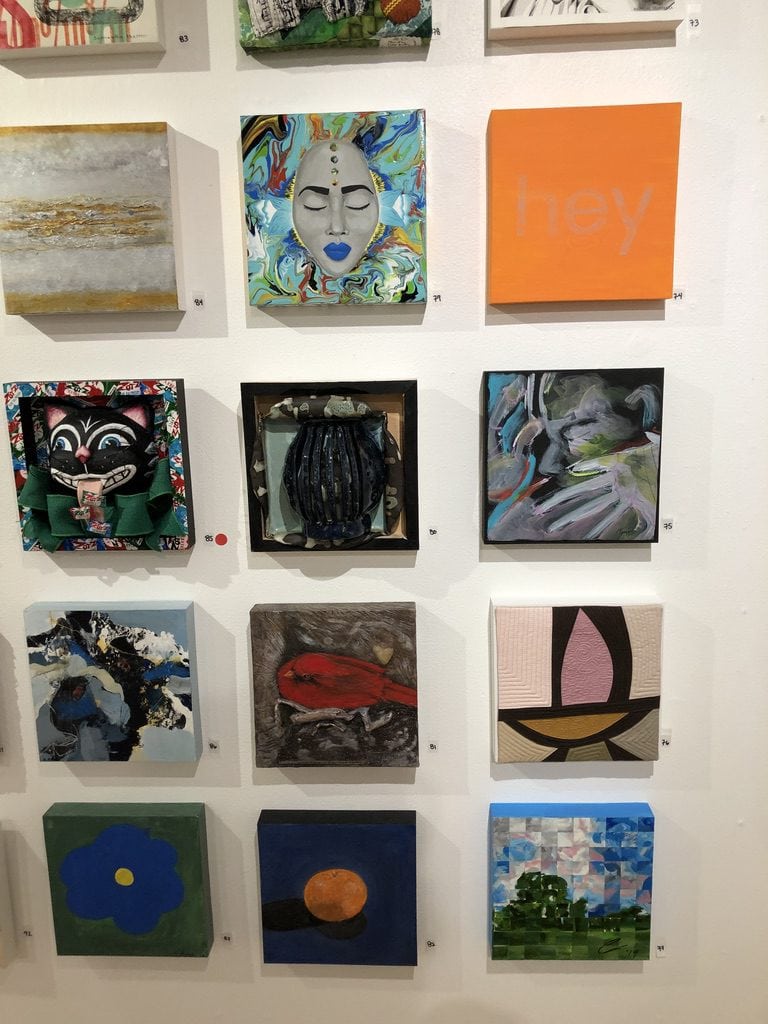 I’m thrilled to have so much going on at the Torpedo Factory this month and I hope you’ll have a chance to drop by if you’re in the area! There’s a lot to see.