Confetti is my newest art quilt and I’d like to share the process of creating it, because it’s a new way of working for me.

This quilt grew out of my work at the Crow Barn last year, although it’s a completely new work–you can read about that experience here and here. 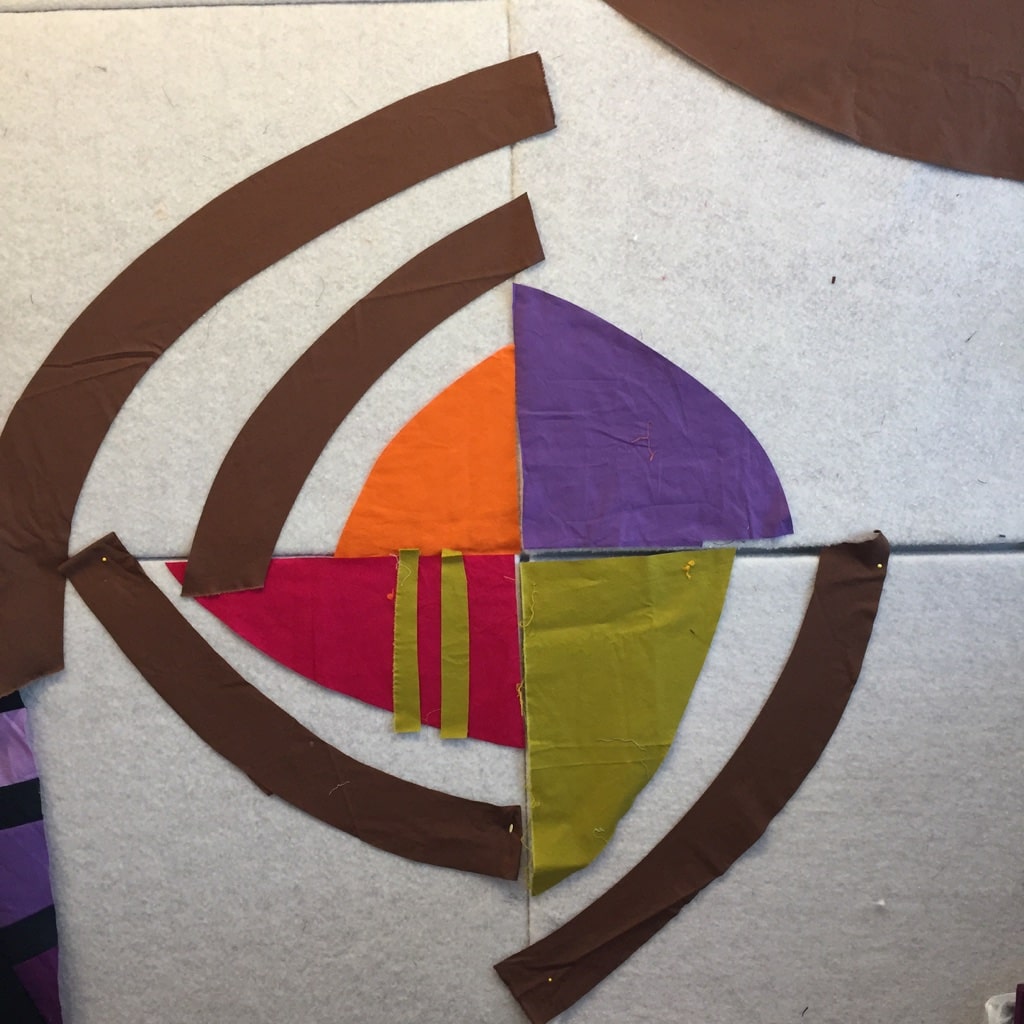 I’ve always been intrigued by curves, but usually they’re much smaller! Confetti finished at about 46″ square.

One of the things I enjoy about creating improvisationally is the fact that I never know exactly what the quilt will look like when I’m finished. It’s a little like putting a jigsaw puzzle together, but I get to decide what the picture will look like. Normally, I only make two decisions to begin–how big and what colors.

My design wall is constructed of pieces of insulation board that are each two feet square. So I decided to use an area for the design that was two squares high by two squares wide–48″ in total.

Color was the next step. I began with arcs again, but these would be chocolate brown instead of black. I wanted the colors to be strong and vibrant, so I started with the central quarter circles in purple, green, orange, and hot pink.

For this design to work, I needed to lay in all the colors and make the design decisions before any seams were sewn. This is a major departure from my normal way of working, which is to create units of the design individually and sew them together, designing as I go.

Again, I used the idea of color in the arcs separated by spines of a darker brown. Adding some dull gold values to the arcs helps to make the stronger colors pop. The stripes in the central quarters were mostly left over from a previous quilt and added some energy to those larger areas.

I cut the brown arcs freehand, then cut chunks of color to fill in the spaces with the spines. You can see in the images that the colors are just roughly laid in. It’s definitely not a pretty process! 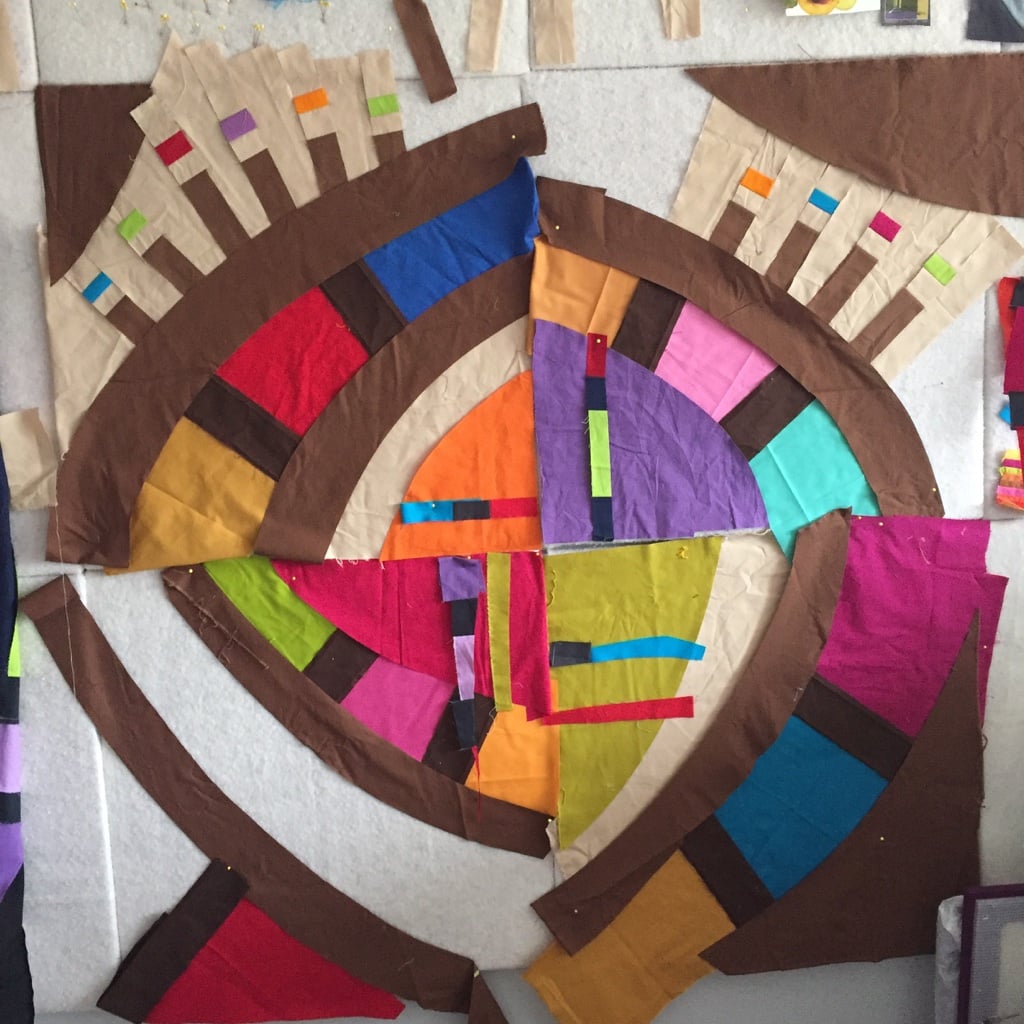 The confetti dots weren’t in my original design idea, but they added a lighter fell to the piece and once I started adding them in I was happy with the energy they created.

In these versions, you can see I initially planned to  use brown in the four outer corners, but once the confetti dots were added in, it seemed a little dull. This is how the design changes as decisions are made–each one influences the next. 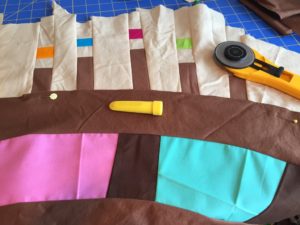 Once the colors and lines were laid in, it was time to sew the seams together. I used a chalk marker to mark the lines for the seams, then pinned them and carefully transported the sections to my cutting board. I didn’t add seam allowances, but sewed the seam as it was marked on the design wall, so the final quilt ended up slightly smaller than the original design. In this type of improv work, the design itself is improvisational, but the actual construction needs to be fairly precise to make sure the lines end up where you want them to be. 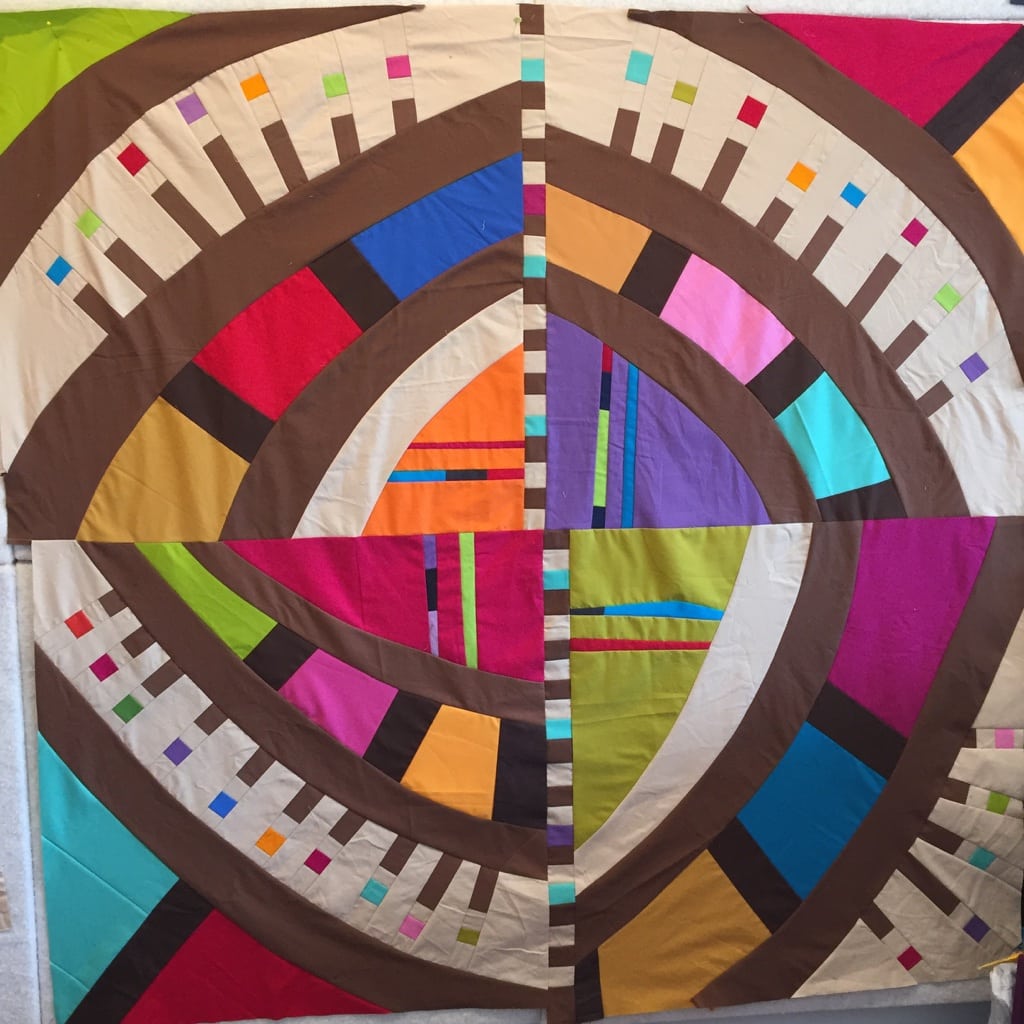 I dealt with the dull brown corners by adding color to three corners and confetti dots to the lower right so they wouldn’t be symmetrical. The light areas are a khaki color, which opens up the design. I’ve only recently learned this–before last year I rarely used such light values in my work.

The vertical stripes in the center are an example of turning a problem into a design element. I sewed each quadrant together separately. When I came to the lower right quadrant–the last one to be sewn–it turned out about two inches smaller than the rest! I didn’t want to cut the rest of the piece down to fit, so I created stripes using the brown and khaki fabrics with a pop of aqua. I liked the effect of bringing the lighter value into the center, and it seemed to unify the design.

Because the composition was fairly complicated, I used simple vertical lines in the stitching. 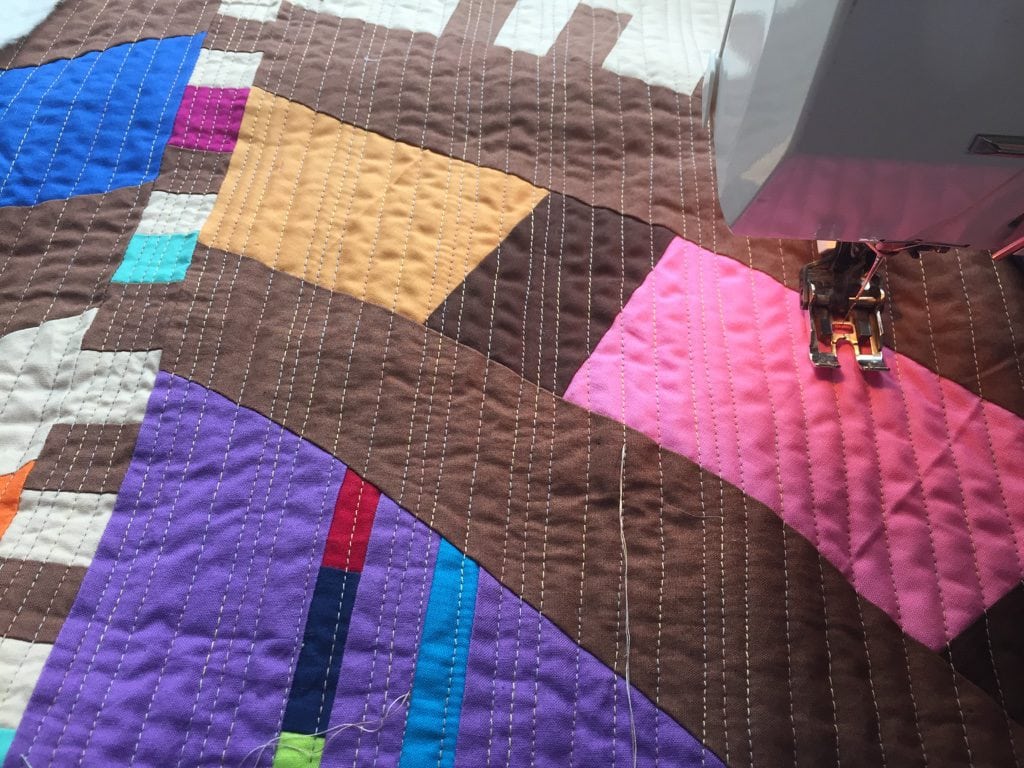 I hope to be able to exhibit this one soon! Maybe it will turn out to be the beginning of a series.