Fireworks is Ready to Go

I’ve had my head down the last two weeks in the studio frantically stitching.

I’m leaving in a few minutes to go to the Crow Barn for two weeks to study with Nancy Crow and I realized two weeks ago that I was supposed to recreate my quilt from last year in two different colorways. You can read about last year’s odyssey here and here.

For me, these quilts are enormous–roughly 72″ square. So there wasn’t time to do it again twice. But I thought I could get one more pieced in the time I had available. 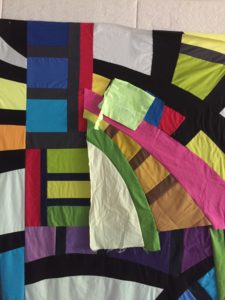 The colorway I chose was brights with brown. I began by making templates of each piece in the quilt with freezer paper–laying the paper up on top of the quilt on the design wall and tracing the shape. Then I cut each piece out in the new color I’d chosen, adding a 1/4″ seam allowance so it would be roughly the same size as the original. You can see the building process in the image above–the green and pink arcs with the brown section in between is the new piece laid on top of the old one. 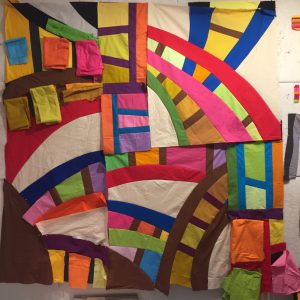 Here’s another view with the construction process nearly finished above. You can see in the upper left and lower right how I laid the colors out to see how they worked with the whole before cutting into them. Usually it took several tries before I got it right. And did I mention I didn’t have much time?

I wasn’t entirely sure about the reason for doing the quilt again–maybe that was why I blocked it out for so long. And I have to admit I was slightly intimidated by making this quilt again because I’d had such a hard time with the construction the first time, and it was so big! But as I worked, I realized I was learning about color and construction in a different way because I didn’t really have to reinvent the wheel with a new composition. And it went a whole lot faster! 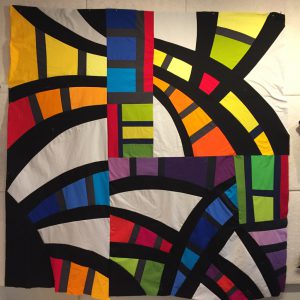 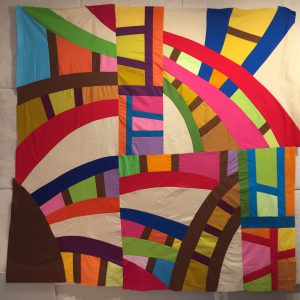 The composition of this new quilt is slightly different than the original, to deal with some construction issues I had the first time and also to try something a little new. It was interesting that even though I built the second one on top of the first one, the lines changed a bit so they aren’t exactly the same. The edges turned out a little wonky too, but I think I’m going to let that be and not try to square it up. I’ll decide about that after it’s quilted.

I don’t think the arcs are as strong in the bright colors as they are in the black–there isn’t as much contrast. Maybe if I had used lighter colors in the interior sections with the segmented lines it would have been different, but I tried that and felt the lighter colors were a bit anemic.

It’s finished though, and I learned from the experience, so that what counts.

I don’t know how much time I’ll have to post while I’m at the Barn, but I will do a roundup next weekend and another when I get back at the very least. Wish me luck!